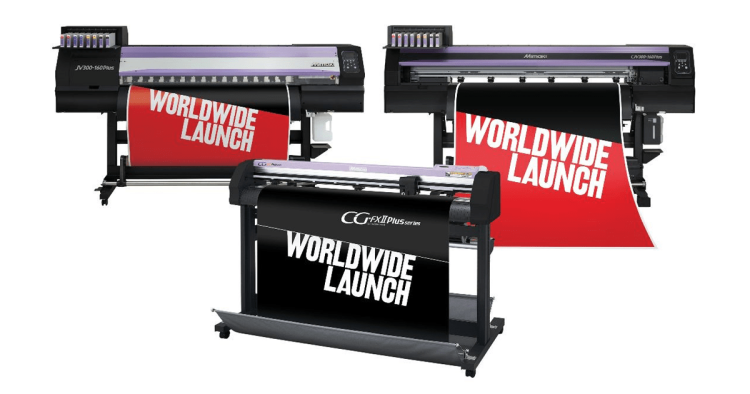 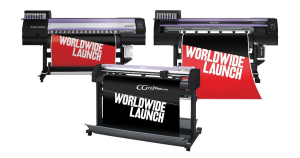 Hybrid Services, the UK and Ireland Mimaki distributor, is set to unveil a series of new products at The Print Show 2019, which is taking place from Tuesday 17th – Thursday 19th September at the NEC. The new hardware announcements span the Mimaki Sign and Graphics range and promise to provide visitors to the show with front row seats to UK & Ireland, European and worldwide launches.

The Print Show will play host to the worldwide premier of the brand new Mimaki JV300Plus Series super-fast wide-format solvent printer and the CJV300Plus Series integrated printer/cutter, as Brett Newman, Chief Operations Manager at Hybrid Services reveals; “We are delighted to be able to wow visitors to The Print Show with the global launch of these two next-generation products from Mimaki that have a number of additional features and benefits that we are certain will impress the market.”

Available at 1.6m wide, both the Mimaki CJV300Plus and JV300Plus are set to dramatically reduce waste with the introduction of new 600ml ink bags that are simply placed within a reusable eco cartridge, which comes as a welcome introduction with the increasing focus of the industry on improving environmental standards. “Not only will these 600ml ink bags increase the green credentials of the Mimaki range, they will significantly reduce ink costs, providing greater profitability to print providers,” continues Newman.

The Mimaki CJV300Plus Series printer/cutter features a new ID Cut function to make printing and cutting easier and faster. The barcode, read by the registration mark sensor on the CJV300Plus printer/cutter, contains cutting and rotation information allowing the machine to automate the cutting process. This function is particularly useful when running nested print-cut jobs, as the cutter continuously reads the data for both single and combined jobs.

Other enhancements include a production mode for blasting through high-speed print runs and the latest Mimaki core technologies, including Mimaki Advanced Pass System (MAPS4) ensure seamless functionality and consistently high-quality prints. Further additions include increased weight capacity on the take-up unit and improved media feeding accuracy and correction, opening up a variety of heavier-weight and thicker media.

The new Mimaki JV300Plus Series and CJV300Plus Series are accompanied by a further new global first: the release of the brand new Mimaki CG-FXIIPlus cutter, which also houses the new ID Cut function utilising barcodes for error reduction, increased efficiency and a 25% increase in cutting pressure.

Making its European debut at The Print Show is the brand new Mimaki SWJ-320EA super-wide solvent printer. “This is a great opportunity for visitors to have first eyes on this high-speed and quality printer that is anticipated to take the large format indoor and outdoor markets by storm,” states Newman. The Print Show will also play host to the first public presentation of the new Mimaki JFX200-2513EX 8’ x 4’ flatbed LED UV printer. Thanks to a new print head configuration, the JFX200-2513EX doubles output speeds when printing with white ink in all print modes and with the addition of a new draft mode, a 280% speed increase, resulting in a maximum speed of 35sq metres per hour.

“The Mimaki JFX200 is the flatbed of choice for many reasons,” Newman remarks. “The new model is faster and even easier to use and looks set to continue the range’s dominance in the sector.”

Hybrid will also present Mimaki’s multi-award winning UCJV Series LED UV printer/cutters that offer a highly versatile solution for print professionals looking for a creative and productive edge, along with the popular, award-winning Mimaki UJF-3042MkII for direct-to-object printing and a selection of other Mimaki technology.