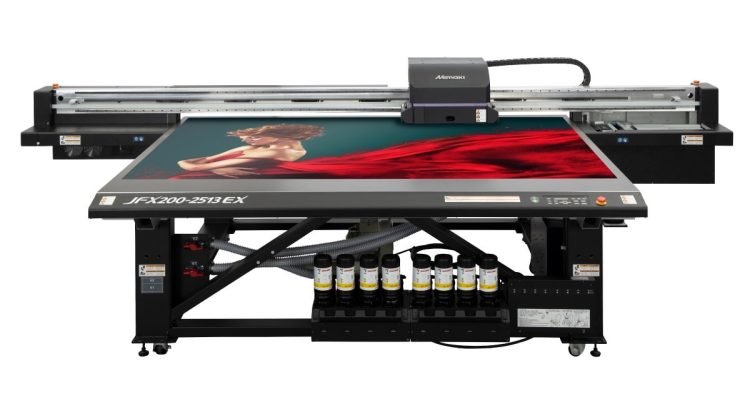 Hybrid Services, the exclusive distributor for Mimaki inkjet printers and cutting systems in the UK and Ireland, has announced the launch of the new Mimaki JFX200-2513EX – an 8’ x 4’ flatbed LED UV printer that adds additional features and increased productivity to the current line-up.

“Mimaki’s JFX200 range has always offered sign makers and print providers the perfect flatbed printing solution, hence its enduring popularity in the UK and Ireland” comments Hybrid’s Chief Operations Manager, Brett Newman. “With the launch of the JFX200-2513EX, Mimaki has made substantial speed improvements, as well as adding some highly useful functionality.”

Thanks to a new print head configuration, the JFX200-2513EX doubles output speeds when printing with white ink in all print modes and with the addition of a new draft mode, a 280% speed increase, resulting in a maximum speed of 35sq metres per hour. “Higher print speeds take the pressure off time-sensitive jobs and help our customers reduce lead times,” states Newman. “With the majority of existing JFX200 printers being commissioned with white ink, the new ‘EX’ model will deliver a powerful solution that will make a difference right at the heart of the graphics printing industry.”

Renowned for its high quality of output and the creative potential it offers, the JFX200 Series utilises a combination of white, clear and process inks to print to a vast array of rigid substrates using Mimaki’s pioneering LED UV curing technology. Its 2.5m x 1.3m print area maximises the potential for printing to industry standard 8’ x 4’ boards and with a head gap of 50mm and maximum media weight of 250kg, it is capable of printing to a wide variety of materials.

New features incorporate several of Mimaki’s Core Technologies – proprietary innovations designed to deliver optimum print quality and usability with the minimum user intervention. These include the integration of its NCU and NRS systems for automatically detecting and resolving nozzle firing issues and the company’s MAPS system that through the use of an advanced algorithm, prints optimum gradation patterns on each pass, significantly reducing any ‘banding’ effects in the print. A foot pedal has been added to control the table vacuum and ethernet connectivity allows remote job messaging and the simultaneous connection of multiple printers. The new JFX200-2513EX will also feature a new ‘2.5D Emboss Print’ mode, enabling multiple layers of ink to be printed to add a three-dimensional effect to the print – adding creative, textured finishes that combine colour and smooth, raised surfaces.

“The Mimaki JFX200 is the flatbed of choice for many reasons,” Newman remarks. “The new model is faster, even more reliable and even easier to use and looks set to continue the range’s dominance in the sector.”