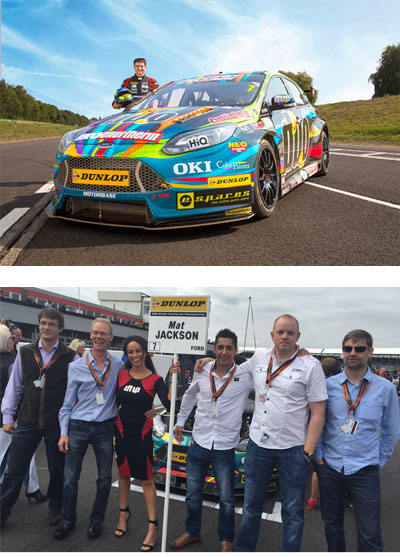 OKI are giving promising artists’ as well as experienced designers an amazing opportunity to design a car wrap fit for the racetrack through the Print my Ride competition. Applicants upload their designs to the Print My Ride website where it will be applied to a virtual car and even viewed in a rotating 3D view before being submitted to an expert judging panel.

Entrants will be divided into 6 categories and the lucky winners will receive prizes including a 1:18 scale model car wrapped in their artwork and an all-expenses-paid VIP trip for two to a Dunlop MSA British Touring Car Championship event where they will have access to the team garages, a garage tour, a grid walk, a meet-and-greet session with the drivers and signed team kit. The ‘Overall design winner’ will also receive 50% off an OKI hardware product of their choice.

Some of the team at Signmaster attended the British Touring Car Championship event at Silverstone alongside OKI to show their support to the Motorbase racing team. Jay Fleming – Head of Hardware Sales at Signmaster adds “It was a day to remember. The team at Signmaster thoroughly enjoyed the race day. The drivers performed really well, the hospitality from Motorbase was great and the car looked amazing! The OKI Colorpainter M-64s used to print the car wrap, produced vibrant solid colours and excelled gradients, helping to merge the sponsorship artworks into a seamless wrap. This really helped the car standout on the track”.

The wrapped car will be on show at the Print Show in October between OKI and Signmaster’s stand P01 so come along and find out more about this extraordinary competition and see the OKI wide-format printers in action.